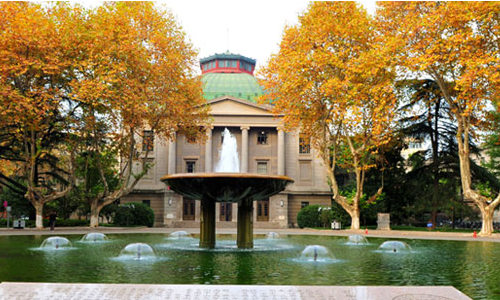 Section I Use of English

Read the following text. Choose the best word (s) for each numbered blank and mark A, B, C or D on the ANSWER SHEET. (10 points)

Could a hug a day keep the doctor away? The answer may be a resounding "yes!" 1 helping you feel close and 2 to people you care about, it turns out that hugs can bring a 3 of health benefits to your body and mind. Believe it or not, a warm embrace might even help you 4 getting sick this winter.

In a recent study 5 over 400 health adults, researchers from Carnegie Mellon University in Pennsylvania examined the effects of perceived social support and the receipt of hugs 6 the participants' susceptibility to developing the common cold after being 7 to the virus .People who perceived greater social support were less likely to come 8 with a cold ,and the researchers 9 that the stress-reducing effects of hugging 10 about 32 percent of that beneficial effect. 11 among those who got a cold, the ones who felt greater social support and received more frequent hugs had less severe 12 .

"Hugging protects people who are under stress from the 13 risk for colds that's usually 14 with stress," notes Sheldon Cohen, a professor of psychology at Carnegie. Hugging "is a marker of intimacy and helps 15 the feeling that others are there to help 16 difficulty."

Some experts 17 the stress-reducing , health-related benefits of hugging to the release of oxytocin, often called "the bonding hormone" 18 it promotes attachment in relationships, including that between mother and their newborn babies. Oxytocin is made primarily in the central lower part of the brain , and some of it is released into the bloodstream. But some of it 19 in the brain, where it 20 mood, behavior and physiology.

Read the following four texts. Answer the questions below each text by choosing A, B, C or D. Mark your answers on the ANSWER SHEET. (40 points)

First two hours , now three hours-this is how far in advance authorities are recommending people show up to catch a domestic flight , at least at some major U.S. airports with increasingly massive security lines.

Americans are willing to tolerate time-consuming security procedures in return for increased safety. The crash of Egypt Air Flight 804,which terrorists may have downed over the Mediterranean Sea ,provides another tragic reminder of why. But demanding too much of air travelers or providing too little security in return undermines public support for the process. And it should: Wasted time is a drag on Americans' economic and private lives, not to mention infuriating.

Last year, the Transportation Security Administration (TSA) found in a secret check that undercover investigators were able to sneak weapons---both fake and real-past airport security nearly every time they tried .Enhanced security measures since then, combined with a rise in airline travel due to the improving Chicago's O'Hare International .It is not yet clear how much more effective airline security has become-but the lines are obvious.

Part of the issue is that the government did not anticipate the steep increase in airline travel , so the TSA is now rushing to get new screeners on the line. Part of the issue is that airports have only so much room for screening lanes. Another factor may be that more people are trying to overpack their carry-on bags to avoid checked-baggage fees, though the airlines strongly dispute this.

There is one step the TSA could take that would not require remodeling airports or rushing to hire: Enroll more people in the PreCheck program. PreCheck is supposed to be a win-win for travelers and the TSA. Passengers who pass a background check are eligible to use expedited screening lanes. This allows the TSA wants to enroll 25 million people in PreCheck.

It has not gotten anywhere close to that, and one big reason is sticker shock. Passengers must pay $85 every five years to process their background checks. Since the beginning, this price tag has been PreCheck's fatal flaw. Upcoming reforms might bring the price to a more reasonable level. But Congress should look into doing so directly, by helping to finance PreCheck enrollment or to cut costs in other ways.

The TSA cannot continue diverting resources into underused PreCheck lanes while most of the traveling public suffers in unnecessary lines. It is long past time to make the program work.

[A] stress the urgency to strengthen security worldwide.

[B] highlight the necessity of upgrading major US airports.

22. which of the following contributions to long waits at major airport?

[A] New restrictions on carry-on bags.

[B] The declining efficiency of the TSA.

[C] An increase in the number of travelers.

【答案】[C] An increase in the number of travelers.

24. One problem with the PreCheck program is

[A] A dramatic reduction of its scale.

[C] The government's reluctance to back it.

[D] An unreasonable price for enrollment.

【答案】[D] An unreasonable price for enrollment.

25. Which of the following would be the best title for the text?

[A] Less Screening for More Safety

[C] Getting Stuck in Security Lines

"The ancient Hawaiians were astronomers," wrote Queen Liliuokalani, Hawaii's last reigning monarch, in 1897. Star watchers were among the most esteemed members of Hawaiian society. Sadly, all is not well with astronomy in Hawaii today. Protests have erupted over construction of the Thirty Meter Telescope(TMT), a giant observatory that promises to revolutionize humanity's view of the cosmos.

At issue is the TMT's planned location on Mauna Kea, a dormant volcano worshiped by some Hawaiians as the piko , that connects the Hawaiian Islands to the heavens. But Mauna Kea is also home to some of the world's most powerful telescopes. Rested in the Pacific Ocean, Mauna Kea's peak rises above the bulk of our planet's dense atmosphere, where conditions allow telescopes to obtain images of unsurpassed clarity.

Opposition to telescopes on Mauna Kea is nothing new. A small but vocal group of Hawaiians and environments have long viewed their presence as disrespect for sacred land and a painful reminder of the occupation of what was once a sovereign nation.

Some blame for the current controversy belongs to astronomers. In their eagerness to build bigger telescopes, they forgot that science is the only way of understanding the world. They did not always prioritize the protection of Mauna Kea's fragile ecosystems or its holiness to the island's inhabitants. Hawaiian culture is not a relic of the past; it is a living culture undergoing a renaissance today.

Yet science has a cultural history, too, with roots going back to the dawn of civilization. The same curiosity to find what lies beyond the horizon that first brought early Polynesians to Hawaii's shores inspires astronomers today to explore the heavens. Calls to disassemble all telescopes on Mauna Kea or to ban future development there ignore the reality that astronomy and Hawaiian culture both seek to answer big questions about who we are, where we come from and where we are going. Perhaps that is why we explore the starry skies, as if answering a primal calling to know ourselves and our true ancestral homes.

The astronomy community is making compromises to change its use of Mauna Kea. The TMT site was chosen to minimize the telescope's visibility around the island and to avoid archaeological and environmental impact. To limit the number of telescopes on Mauna Kea, old ones will be removed at the end of their lifetimes and their sites returned to a natural state. There is no reason why everyone cannot be welcomed on Mauna Kea to embrace their cultural heritage and to study the stars.

[A] its conservative view on the historical role of astronomy.

[B] the importance of astronomy in ancient Hawaiian society.

[C] the regrettable decline of astronomy in ancient times.

[D] her appreciation of star watchers' feats in her time.

【答案】[B] the importance of astronomy in ancient Hawaiian society.

[A] its geographical features

[B] its protective surroundings.

28.        The construction of the TMT is opposed by some locals partly because

[A] it may risk ruining their intellectual life.

[B] it reminds them of a humiliating history.

[C] their culture will lose a chance of revival.

【答案】[B] it reminds them of a humiliating history.

29.        It can be inferred from Paragraph 5 that progress in today's astronomy

[A] is fulfilling the dreams of ancient Hawaiians.

[B] helps spread Hawaiian culture across the world.

[C] may uncover the origin of Hawaiian culture.

【答案】[C] may uncover the origin of Hawaiian culture.

30.        The author's attitude toward choosing Mauna Kea as the TMT site is one of

Robert F. Kennedy once said that a country's GDP measures "everything except that which makes life worthwhile." With Britain voting to leave the European Union, and GDP already predicted to slow as a result, it is now a timely moment to assess what he was referring to.